Now in general I don’t have a defined “garden year”. We garden year-round, or at least we try to. We have plants in the ground at any given time and seedlings in trays or in small pots on the windowsill or in the cold frame on our balcony. But like with most people, our main focus is on the summer crops and since they are sown early in the calendar year here in the Northern Hemisphere, we tend to do our planning between Christmas and Epiphany (when I have time off from work). Also the winter solstice and lengthening days tend to motivate me…

It’s only the beginning of January right now, but I’ve already started some of my seeds. There are crops that need a long time to maturity, like super spicy chili peppers, so I start those early in the year. And I never put all my eggs in one basket, so I like to start about 1/4 of each crop 6-8 weeks before the usual sowing date for my area. I just never know in advance whether we’ll have a mild spring (we have quite a few of those) and it would be a shame to waste it just because I haven’t planned ahead. (I can always put some in the greenhouse or under fleece if we get a frost in April or early May.)

Speaking of the climate – we’re in Southern Germany a couple of hundred yards from a river and our frost hardiness zone is 8 (8b microclimate). It’s basically a great wine-growing climate – so we don’t get many hard frosts and temperatures stay around or above freezing for most of the winter. Summers are mostly hot (over 30°C/86°C is normal in July and August and over 35°C/95°F is something we have to expect for weeks on end) and often very dry. Our last average frost date is officially May 15, but I’ve checked the statistics and frost in May is extremely, extremely rare, so I go by May 1 for at least a part of the plants and cover them if we do get an unexpected frost later on. Often enough those are the plants that do best because they’ve had time to root deep down before temperatures rise (May can already be hot and dry).

So what have I started so far? The south facing windowsill in our living room is very long so I can do quite a bit of plant propagation there. We have chili pepper seedlings, some early cauliflower, broccoli, and some Brussels sprouts (those are for harvesting leaves – but if we get lucky with the weather they will give us sprouts, too). I’ve started some of the herbs that will go in pots on our balcony (which is usually a couple of degrees warmer than the allotment) and I’ve started onions from seed as well as leeks. 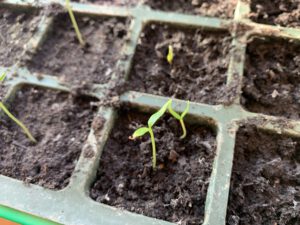 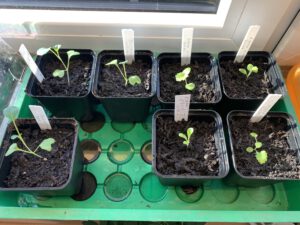 3 cauliflower on the left, 3 common marshmallow and one mystery seedling 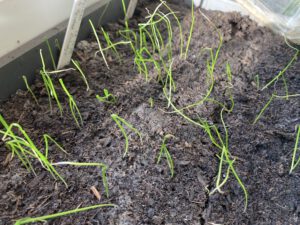 I have a couple of broad beans sprouting in the mini greenhouse/cold frame on our balcony. They will go in the tomato bed as green manure once they’re a bit bigger – with the option of harvesting shoots until mid-May when we take them out. We also direct sowed some, but none of those have come up yet, unfortunately. 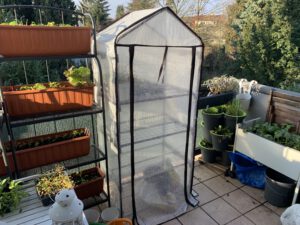 mini greenhouse/cold frame on our balcony 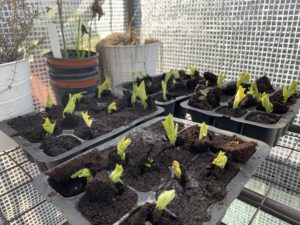 broad beans – as green manure and for shoots

One thing I’m trying this year that is more of an experiment is cranberry bushes from seed… They need to be inside for 2-4 weeks, then out in the cold (around freezing) for 4-6 weeks, then in a slightly warmer space but below room temperature – so I’ll put them in the pantry where I also overwinter pepper plants. I have no idea whether this will work out as planned, but it’s worth a try since I just can’t afford to buy lots of cranberry bushes.

Theme by Anders Noren — Up ↑

We use cookies on our website to give you the most relevant experience by remembering your preferences and repeat visits. By clicking “Accept”, you consent to the use of ALL the cookies.
Cookie settingsACCEPT
Manage consent

This website uses cookies to improve your experience while you navigate through the website. Out of these, the cookies that are categorized as necessary are stored on your browser as they are essential for the working of basic functionalities of the website. We also use third-party cookies that help us analyze and understand how you use this website. These cookies will be stored in your browser only with your consent. You also have the option to opt-out of these cookies. But opting out of some of these cookies may affect your browsing experience.
Necessary Always Enabled

Any cookies that may not be particularly necessary for the website to function and is used specifically to collect user personal data via analytics, ads, other embedded contents are termed as non-necessary cookies. It is mandatory to procure user consent prior to running these cookies on your website.